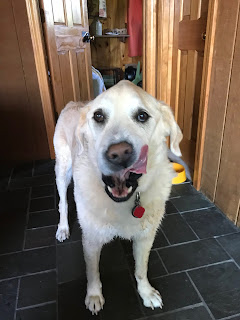 An icon of the Vermont running community passed away Friday. Oscar, a mixed breed but mostly yellow lab, breathed his final breaths at home surrounded by family. Oscar was a prolific runner who trained for hundreds of miles and scores of marathon runners -- including years as an honorary member of Vermont's Run With Jan group. Always ready to run, play, eat, or sleep, Oscar engaged in a never-ending quest for food until one week shy of his 15th birthday. He is survived by 4 humans, Gladys the black lab mix, cat siblings Waffle and Pesto, and 11 chickens whom he protected and visited daily. His family feels fortunate to have shared in such a joyful and wonderful life for so many years.

Dear Oscar, Happy November! Have you been enjoying the cooler weather? Longtime Admirer 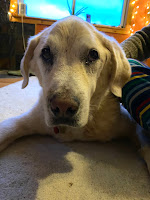 Dear Admirer, Thanks for your support over the years -- it has been the joy of my lifetime to be such an inspiration to my legions of adoring fans!

This morning, my old footpads just couldn't grip the hardwood floor. My human helped me stand up and guided me across the hardwood and slate to the door. Interestingly, I could grip the layer of frozen granular snow on the deck better than the hardwood.

With my human guiding me for balance, I wandered around the grassy yard -- by the lilac bush, the raspberries, the flower garden, you know. All the good bathroom spots.

It's definitely not the old days when I'd get up and just go run ten miles. But I do love November -- my birth month. And it was nice to get out in some sub-thirty-degree weather and think about the winter ahead and all the fun to be had.

Keep up the top-flight admiring. It does make a difference for an old dog like me! 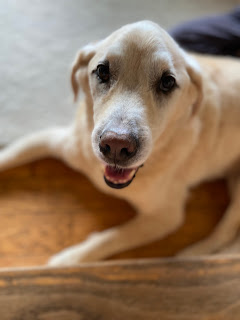 Dear Fan, The majority of my life has been characterized by being constantly ready to do any of the following at a seconds' notice: run, eat, play, sleep.

I am still living by the same rules -- with some differences. I no longer run with my people. As recently as a month ago, I was able to walk down to the bus stop with the family, but even that is challenging now. Don't get me wrong: I still roam the yard, checking out the chickens and I still visit all the best bathroom spots. I just do it a bit more... slowly. And not quite as gracefully. But I still get out there.

Playing also looks a bit different. Like these days I mostly lay on my side while you pet me. It's awesome.

Eating is the same. Two scoops of Holistic Select, which I inhale in ten seconds mostly without chewing (note: I am aware of those disgusting little pills in there, by the way). Also, I have noticed my human every now and then giving me table scraps. He never used to do that. Also awesome.

And the sleeping is similar, except I'm not really doing stairs these days, Downstairs in the front room and living room is fine for me these days.

I want you to know I still love life and am a happy dog. In my old age, I am okay that things look a bit slower and slightly different. It's all about being in a great spot with loving people. And food. It's always about the food.

Dear Oscar, What have you been up to? A Longtime Fan 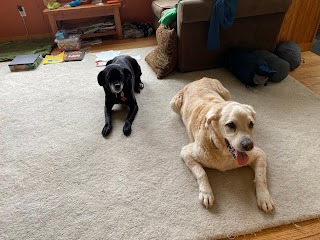 Thanks for the note. I am cruising full speed towards my 15th birthday (in November). I am still quite enthusiastic and I enjoy being pet and brushed. Every so often I walk with the family to the bus stop.

When you visit, I am very polite -- I don't ever jump on anyone. (Note: some claim I can't jump on anyone; I think that isn't the point.)

And for those who don't think I can still jump, I dare you: leave a little food on the countertop. I'll show you who can jump. 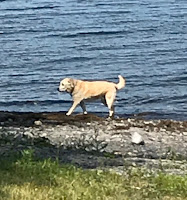 This past weekend -- with its sunshine and 70-degree temps -- has me remembering (and looking forward to) what humans commonly refer to as "the Dog Days" of summer. Lazing around the fields of North Hero... taking dips in Lake Champlain... lazy hikes on the trails of Richmond, Vermont... running on the dirt roads...

Yep, you can count this dog ready to do all of the above. Granted, at 12 years-old, my running has become a bit more... shall we say... "leisurely." I used to be a running machine. Now, I'm not ashamed to say that a mile here, a couple miles there, stopping to sniff the flowers or just pee on them... that's more my style these days.

My human running partners of course sometimes seem frustrated by this. I'm like, why the rush? Where do you have to be? 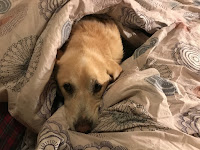 For now, though, while it's still May, I'm still just summer dreaming. But I know these dreams will come true. Summer, when you come, I'll be waiting.

Dear Oscar, Where do you like to eat? -- Foodie 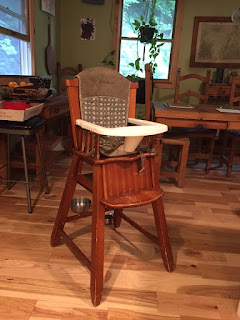 Like a fisherman who tries to cast his lure or fly into waters with high concentrations of fish, a dog trolls areas with a high probability of food occurrences. That's why, three times a day,  I like to position myself around the chair in the photo (see left). When this chair is occupied, it's almost too easy: food all but flies off the plate and into my mouth.

Sometimes I feel like I should be putting forth more effort; begging, whimpering, or even jumping up and down. But, without encouragement, occupants of this seat just throw food to the floor. So I have to wonder: why waste the effort?

That's where I like to get my between-mealtime snacks. Otherwise, it's two scoops of California Natural Lamb and Rice formula in my bowl two times daily.

Hope this helps. Your friend, Oscar
Posted by oscar at 9:38 AM No comments:

Back in the Country 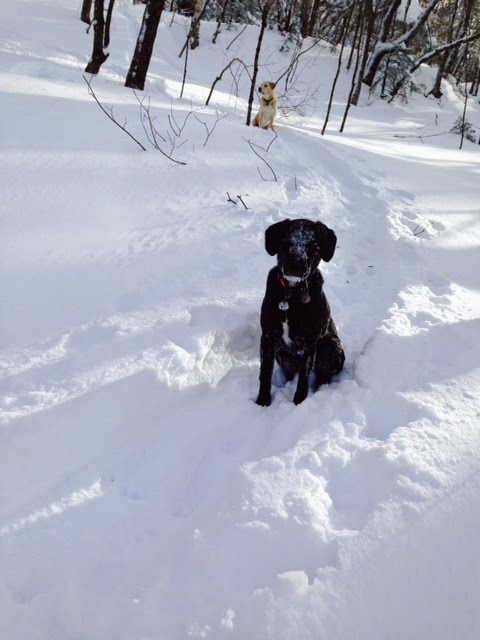 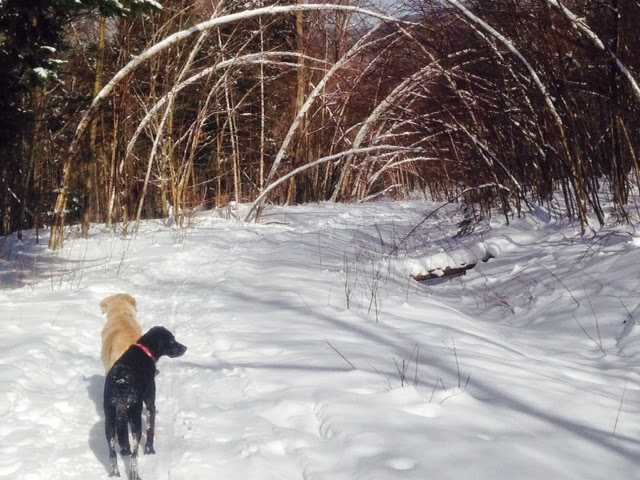 You can't rush certain things. And a backcountry ski season is one of them.

Backcountry skiing in 2015 took its sweet time getting here. There are, of course, enthusiasts who hit the woods almost after the first frost, wrecking their skis, getting tips caught under called logs, and tearing their clothes in brambles. Not us, however. My human, having an employee season pass at Stowe, prefers to access the lift-served trails until the woods have halfway decent coverage. Despite inherent risks, it's nicer to concentrate on the solitude, beauty, and fun rather than the hidden dangers under a less-than-adequate snowpack.

Anyway, after a bang of a start and a cold, but not-very-snowy January, winter arrived with the Ground Hog... and the backcountry is deluxe.  Skiers were really getting restless towards the end of January though...

Not me, of course. Instead of restless, I get opportunistic. Without referring to weather records, January 2015 must have been one of the coldest in history, and my people just didn't take me out as much as usual. My answer to that? I simply eat every morsel of food in the house that is left on a counter, left unwatched on a plate, or even left in the sink on a dirty dish. Just my way of sending a message: exercise me!

But then in came February. It has remained cold, but the snow has arrived. And the backcountry has never been better. In fact, without a thaw yet, the skiing in backwoods Vermont has been awesome and sustained. We keep getting an inch here, a few inches there, a foot there... and tracks and skin trails get filled in. Today, we went to a backcountry area growing in popularity, but because of the repeated fill-ins, we skied the shot where "everyone goes"... and got fresh powder all the way. We never ski that line because -- even in the backcountry -- it gets tracked up.

Why were there freshies there today? Well, I suppose the minus-9 degree temps had something to do with it. With Gunnar in a new childcare (we are referring to it as "school") that takes him on Fridays, Mark, Gladys, and I are now fired up about skinning and skiing on Fridays. We went back and forth this morning, but ultimately decided to go for it, figuring there was not much wind, the sun was shining, and we could always turn back if it was too cold. Let me tell you: it was brisk but beautiful. As usual, the "go for it" call worked.

We have been out in the backcountry about five times in the last two weeks. The first time out, Mark was concerned about me. Something about my age. The snow was deep, and -- I'm not going to lie -- if there's an easier way down (read: a skin track instead of swimming through snow over my head), I'll probably take it. And that can sometimes mean I'm not right behind him. And two times that first day -- twice -- Mark stopped and called for me. I was nowhere in sight as he and Gladys wondered what to do. Both times I had to double back and return to him... from my spot on the route farther downhill from where he was. Don't worry about me, human. You just try to keep up.

I'm not too worried though. If I have to climb back up to let him know I'm waiting, so be it. I'm just psyched to be out on negative temperature day in the Vermont backcountry.
Posted by oscar at 12:28 PM No comments:

oscar
Oscar is yellow. He's 14 years-old, and he loves just about everything. People, food, kids, food, car rides, food, hiking, food, sleeping, food, watching TV, food... you get the picture. Above all, he loves to run. Below is Oscar's Running Log. Oscar no longer runs (so the dates on the list are from some years ago), but we'll put it this way: he covered more miles and distances than most dogs. Send questions to Oscar at oscarvt99@gmail.com.